Create an Account - Increase your productivity, customize your experience, and engage in information you care about.

Canton's vision of building a world class, community golf facility was realized when Pheasant Run Golf Club opened its doors in 1995. The now mature and pristine 27-hole layout, designed by Arthur Hills, will put your skills to the test.

The course encompasses over 300 acres of penncross turf, natural wetlands, woodland areas, and native grasses, designed to be played by all. Arthur Hills states "we created large landing areas off the tee but tightened things up after the drive with water hazards and marshes."

Pheasant Run has 4 sets of tee boxes and can be played from 5,046 yards to 7,125 yards from the tips. Play all the way back and you'll find a course rating of 74.9 and slope of 148, ranking it among the most difficult in the state. With length being a factor, Hills designed large, receptive greens that are well guarded by stray shots. Green speed and condition are amongst the best around with speeds in the mid 9s.

Not much trouble off the tee here. A solid approach will stay right of the hole to give an uphill putt at the hole. Avoid being short and left of the green as the green will slope away from you.

A difficult driving hole where driver is not recommended. Placement is key off the tee with the 15 yard marker your target. Your approach should favor the left side of the green as a hazard creeps in on the right.

Reach back and rip it off this tee. A long par 4 with not much in the way. Length is the hazard on this hole. Favor the left side of the green on your approach.

A short par 5 that can be reached with 2 well-placed shots. A fade off the tee is the desired shot to give you a chance at the green. Lay up if you're at your limit; this is a well guarded green. 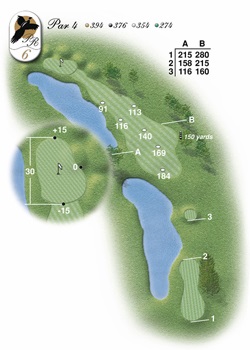 A great challenge off the tee on this short par 4. The 150 yard mark is your target. Out of bounds skirts the right side of the hole with water lurking the entire left hand side of the hole and green. Placement is key here on both the tee shot and approach. 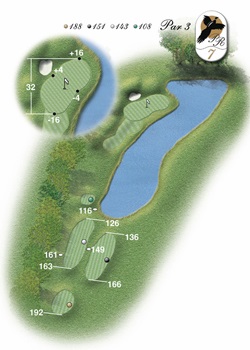 A great test of skill and nerves. Anything on the green is a great shot. Favor the left side as water surrounds the entire right side of this green. 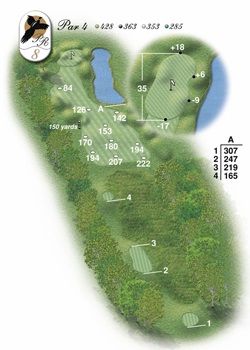 A well placed drive on this hole is required. Note the hazard on the right as it might come into play off the tee. Favor the left side of the green. Play more break than appears near the slopes on this green. 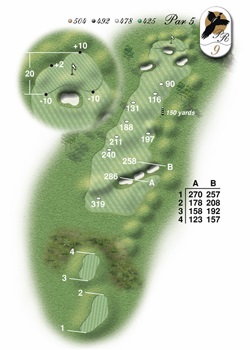 A solid par 5 with a very generous landing area off the tee. Make sure your lay up is far enough back to give a full swing into your approach. The green is well guarded with a large swale in the center. 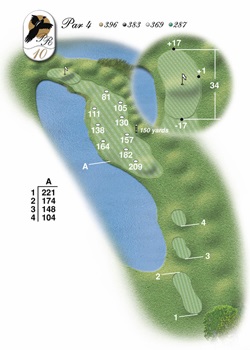 Favor the right side of the fairway off the tee. The 2-tiered green requires a well placed approach. 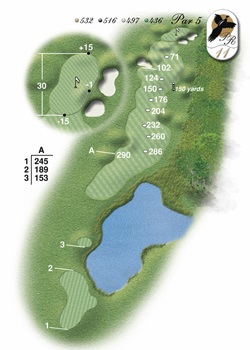 This medium length par 5 is reachable with a big drive. Not much is in the way until you reach this well positioned green. If the pin is up front then play for birdie, otherwise par is a good score. 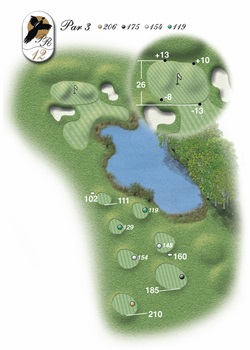 This is a medium to long par 3 depending on where the tees are. The green is well guarded and provides a unique horseshoe type swale directly in the middle. Make sure your approach lands on the right level. 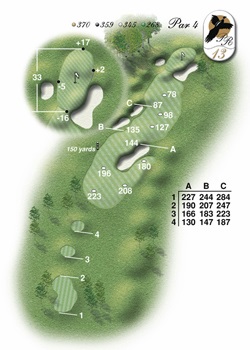 A great par 4 with placement off the tee being key. Aim well right of the 150 yard marker as there is more fairway to the right than visible. Note the pin placement as this is a 2-tiered green. 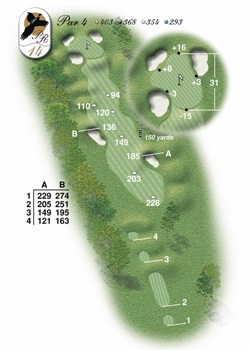 Favor the right side of the fairway off the tee. Your approach into the green should stay short and right, as left and long are mistakes. 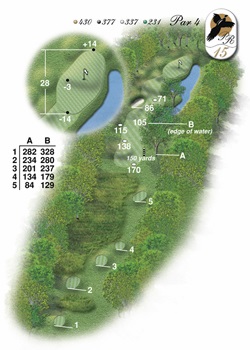 Aim just left of the large Oak to the right of the fairway. Hazards come into play on both sides of this hole so placement should be your objective. Par is a great score! 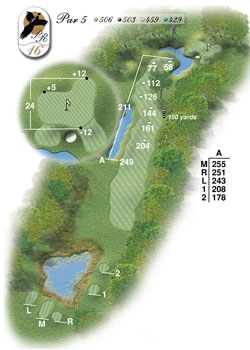 Favor the right side off the tee as there is a hazard on the left not visible from the tee. Make sure your lay up distance is 75 to100 yards out. Any further back and you'll be blocked by the large Oak down the middle. 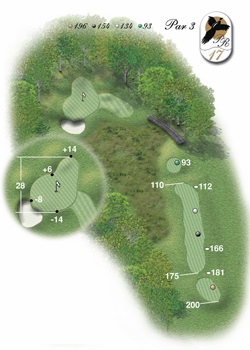 The green is very shallow from back to front so make sure you select the right club on this medium length par 3. Par is a great score! 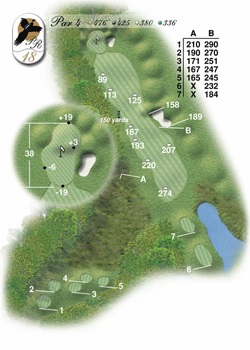 Hole 18 is a long and unique finishing hole. Aim for the bunker off the tee. The hole bends 90 degrees to the left; avoid trying to cut the corner. 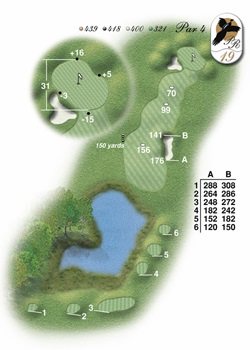 A long uphill par 4 that is usually played into the wind. Favor the left side of the fairway and generally use one extra club on your approach. 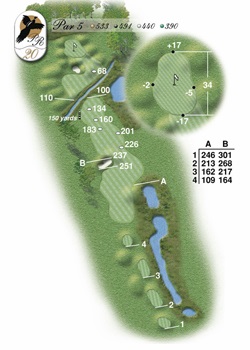 Avoid the fairway bunker off the tee. If successful you may have a chance at reaching this par 5. A stream crosses the fairway at 125 yards out so adjust your lay up accordingly. 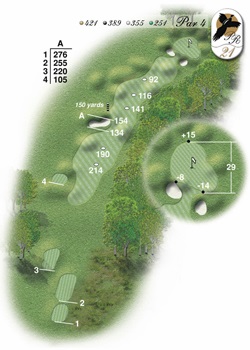 Placement is key off the tee on this well designed par 4. Avoid the fairway bunker and you have a shot at par if you hit this small, guarded green. 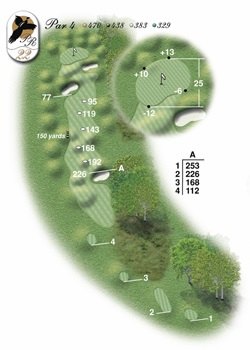 Reach back and rip it on this long par 4. Avoid the right and you'll have a chance at par. A long approach is typical to this green that slopes from back to front. 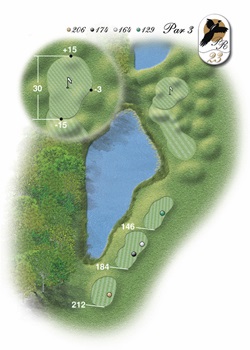 A great par 3 with the green sitting perched on a hillside. Any shot missing this green will be penalized by the mounding surrounding the green. Choose your distance well. 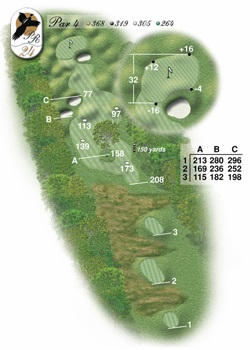 A large Oak sits directly in the middle of this short par 4. Avoid the Oak and you have a fair chance at hitting this green. Long is actually the miss on this approach as the green slopes from front to back. 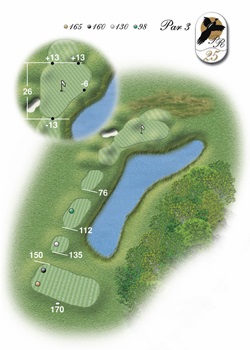 A solid par 3 with a shallow green from back to front. Make sure you select the right club. Execution is key on this hole. 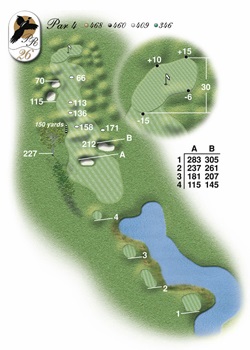 This long and demanding par 4 actually requires a well-placed tee shot if you cannot carry the bunkers in the middle of the fairway. Favor the left side of the green on your approach. Par is a great score! 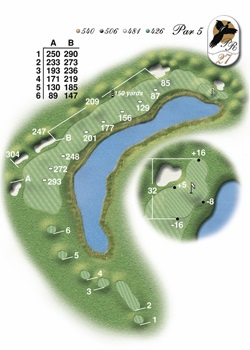 This horseshoe-shaped, par 5 is the ultimate risk / reward hole. Try to cut off too much and you'll find water that runs the entire right side of the hole. Lay up to 125 yards in order to leave a full shot to the green. Putts break more than you think on this green.